Don’t Apologize for your grief 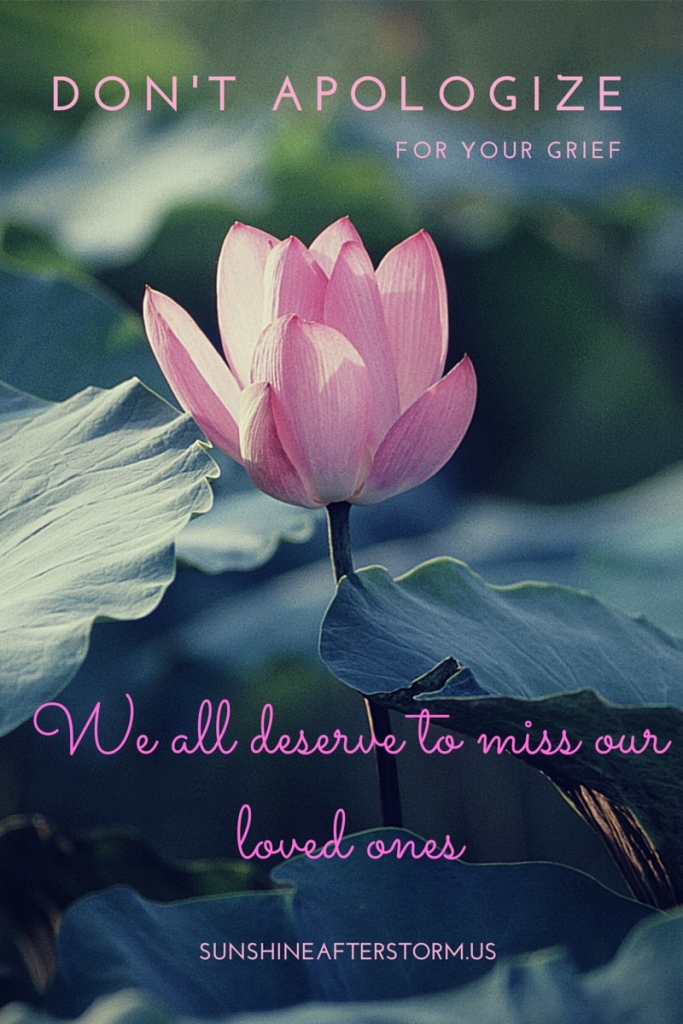 I will be the first to admit that in the months and even probably over a year following my infant daughter’s death, I had so little compassion for people grieving the death of an old person. I just could not understand when someone went on and on about the death of someone in their 80s or 90s. Yes, of course they’ll miss them. But I had just lost my two day old and my heart felt nothing for someone who lost a ninety two year old. I was on the fence about people in their 50s, 60s, and 70s. While still young, they still had a good run, I thought.

That’s not to say that I did not have sympathy for anyone who lost a loved one. In fact, three years ago today, one of my dearest friends said goodbye to her 38 year old sister (JUST turned 38) after a seven year long battle with ovarian cancer. She passed away only three months after my daughter, and her death still hurt tremendously even though I was still a little too numb to grieve openly. After all, 38 is young. Jennifer never had the opportunity to have children. She never got to grow old either. She lost out on so much.

I’ll never forget when my friend, in the midst of her own grief, apologized to me. “I know this is not the same as your loss…” she would start. I hated that. I hated that she felt like she could not be open about her grief because she felt guilty that I just lost a daughter. So I told her never to say that to me again. And over the next few months, we shared our most personal feelings about how our losses changed us, how profoundly it hurt, and how we would never be the same again. The whole situation just sucked. But it was so very nice to have a close friend experiencing the same systematic shock as I was, and to have someone in my inner circle that I could say anything to, and she completely got it.

Over time, the raw pain lightens. Thankfully, as time progresses, my attitude adjusted too. My heart and mind opened, and I developed a deeper sense of compassion for others than I ever believed possible.

No longer in my own fog of grief, I see loss for what it is. No matter the age or the relationship, when someone you love dies, it is the worst pain you can imagine.

About a year ago, I decided to join a grief support class at my church. It was only a month or so long. There were five of us and a facilitator. We spent the first half of the class telling our stories. One man in his sixties had just lost his father. An elderly woman was widowed a month prior. Another man lost a sibling. And a woman in her thirties, like me, had buried her mother about six weeks prior after a year long battle with cancer.

My heart really felt for all of them. But especially the young woman. She too kept apologizing to me. She felt guilty for being so overwhelmed by the death of her mother when I lost my child. But this woman had lost the one person in her life who had always been her guide. Her mother was her best friend, her champion, her confidant. She had no idea how she would continue to make it through every day without the person she was used to talking to multiple times every day. How would she raise her children without her? He loss was profound.

When she finished telling her story I said to her: “Please don’t feel guilty about this. Loss is loss is loss. There is no comparison and you should never feel like what you’ve lost is less significant than what I’ve lost. Your mother was your world. You deserve to grieve fully.”

Those words seemed to lift a heavy burden from her shoulders. And I meant it with my whole heart. I never again wanted anyone to feel like their grief was any less important than mine.

I actually only attended that one class. The effect of that night made me realize that I was no longer in the deepest phase of grief and I was ready to move on to help others find their way out of it.

Don’t apologize for your grief.

DO recognize that depending on the stage of another person’s journey, they may not be able to feel the level of compassion toward your loss that you need from them, but never feel like your loss is less than theirs.

Your pain matters too.